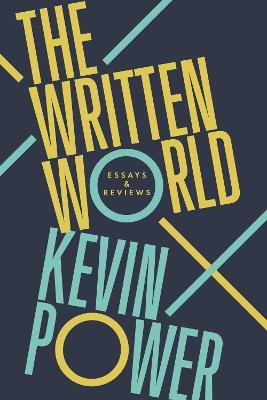 Join Lilliput Press at Books Upstairs for the launch of The Written World: Essays and Reviews, the highly-anticipated first non-fiction title from acclaimed novelist, critic and essayist, Kevin Power.

Carlo Gébler will be the guest speaker on the evening.

We look forward to welcoming you all!

Register for the event here.

Criticism is absolutely an art – and it is never more so than when practised by an actual artist.

During his ten years at the Sunday Business Post, novelist Kevin Power – who has reviewed over 350 books – fell in love with the writing of criticism, and with the reading of it too; particularly by talented novelists who review books on the side.

Art that thinks and feels at the same time – ‘good art’ – requires explication. The writing of criticism in response to such art is an activity that has taken place since Aristotle first sat down to figure out what made tragedy work. It is in the pursuit of this question – what makes good art ‘good’ – that Kevin Power found his vocation.

Power has gathered some thirty-five of his own pieces connected by a theme: this is a book about writing, seen from various positions, and about growth as an artist and a critic.

This collection ranges from essays on Susan Sontag to the meaning of Greta Thunberg, from apocalyptic politics and literary theory to appraisals of Jordan Peterson, Annie Proulx, Michel Houellebecq, Roisin Kiberd and Sally Rooney, among others.

The Written World represents a decade’s worth of reflection and critical engagement – a record of the author’s attempts to honour art, and through art, the world.

Kevin Power is a lecturer at Trinity College Dublin. His novel Bad Day in Blackrock (2008) became a film, What Richard Did (2012), directed by Lenny Abrahamson, which picked up five awards at the Irish Film and Television Awards. In 2009 Power received the highly coveted Hennessy XO Emerging Fiction Award and was the winner of the 2009 Rooney Prize for Irish Literature. His criticism has appeared in The New Yorker Page Turner blog, The Guardian, The Irish Times, Irish Independent, The Stinging Fly, and many other places. In 2021 White City, his much-anticipated second novel, was published to wide acclaim.

PRAISE FOR THE WRITTEN WORLD

‘Power sets out to slay giants, and these incisive essays represent a ballsy foray into cultural politics. Provocative and engaging, The Written World provides a sharp, inventive assessment of what contemporary literary tastes reveal about us.’ – Dr Selina Guinness

‘Utterly engrossing, The Written World is a masterful testament to an apprenticeship hard-won and served with great humour, insight and humanity. You will come away from it feeling brighter, wiser and – unbelievably – kinder towards the world and our strange imagined place in it.’ – Mia Gallagher

‘This was a pleasure to read. It put me in the presence of someone thinking interesting thoughts about interesting things and provoked me to do some thinking of my own. Power really explores ideas. These essays are basically the opposite of hot takes.’ – Patrick Freyne

‘The elegant and intelligent essays in The Written World will appeal to anyone with an interest in literary criticism.’ – Nicole Flattery

‘Thoughtful, incisive, fearless and witty, The Written World offers the casual reader Power’s clear-eyed reappraisal of some of the biggest and most untouchable literary reputations.’ – Ed O’Loughlin

Kevin will sign copies of The Written World and refreshments will be served on the evening.